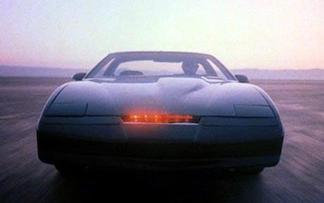 Glen A. Larson, the man responsible for producing the original Battlestar Galactica and Knight Rider television series, often used simple lighting effects in his shows. One famous example is a scanner that consists of a set of red LEDs that scan back and forth. The front of the Knight Rider car had a scanner.

Watch this video tribute to Glen Larson. How many times does the scanner pattern appear?

The Larson scanner demoed in this video is a DIY kit from Evil Mad Scientist Labs.

When you're done with this assignment, you should

How do assignments work?

The course follows a weekly cadence where material is introduced in the Friday-Monday lectures and lab follows up with hands-on guided practice so that you're ready to tackle the week's assignment which is released after lab. Completing each assignment will solidify your understanding of the week's topics. In addition to being a satisfying accomplishment on its own, the code you write each week contributes a building block to your library of Pi features. Completing this system is an accomplishment of which you will be immensely proud!

Each assignment is structured into a core/basic part and one or more proposed extensions. Completing the core part is required for all students; the extensions are the optional "stretch goals" for those students aiming to go further. We encourage everyone to try the extensions; they're a great way to challenge yourself and solidify your understanding.

YEAH = Your Early Assignment Help Each Thursday we'll hold a YEAH session as a kickoff for the week's assignment and more quality time with the CS107e family! We can answer your questions, pump you up for the neat things you'll be learning, and facilitate a group brainstorm on practices for success. YEAH Hours for Assignment 1 will take place Thursday 4-5pm in ohyay. Everyone welcome!

This assignment involves modifying the blink program showed in class. blink.s is an ARM assembly language program that blinks a single LED. To implement a scanner, you will need to control at least 4 LEDs. Using arithmetic and loops, your assembly program changes which LED is lit to show a scanner pattern.

1. Wire up your breadboard

The scanner should have a row of 4 LEDs. If you feel ambitious and want to make more interesting patterns, wire up 8 LEDs. Validate your breadboard wiring by testing that each LED lights up when powered.

We hope you share our appreciation for breadboarding as art and craftsmanship! Secure your components close to the breadboard, snipping the ends to fit and using your pliers to make neat bends. Not only does this look nice, it will be more robust to being handled.

Show off your creation by taking a picture of your larson scanner hardware setup and commit it to your repo with the name larson_board.jpg (or .png). Don't forget to git add the file!

Before starting each new assignment, first do a git pull in your copy of the cs107e.github.io repository to ensure your courseware files are up to date.

Next, update your local assignments repo with the latest starter code for the assignments by pulling any changes from the remote repo:

After these commands, your assignments repo is on dev branch and all files are up to date. Use ls to see the files now in your repo.

At the top level there are two subdirectories src and makefiles. Source files will be stored in src directory, which itself is further divided into into subdirectories based on the type of source file. For assign1, the only subdirectory is src/apps which holds the files for programs that run on the Pi. In later assignments, there will be additional subdirectories for library modules and test programs.

In the directory src/apps is the file larson.s. This is the file you will edit to implement your Larson scanner.

To build a program, we use the make tool, which looks for a file named Makefile in the current directory. But there is no Makefile here! When working on assign1, you will want to use the assign1.makefile, but later you will use assign2.makefile and so on. To easily switch between them, we will use a symbolic link (also called a soft link) that will point Makefile to the current assignment makefile. The ln command is used to create a symbolic link. Use the commands below to point to the assign1.makefile:

If you're wondering how make and makefiles work, sit tight. We have an lab exercise on makefiles coming up lab2.

The starter program is a copy of the blink.s you studied in lab 1. This program configures the single pin GPIO 20 and enters an infinite loop to set and clear that pin. Carefully review this code and be sure you understand how it accomplishes its tasks. Ask questions if anything is unclear! Your job is to modify this program to instead blink the scanner sequence.

A good first step is to extend the initialization code to configure all of the GPIOs your scanner uses, not just GPIO 20. Refer to section 6 of the Broadcom ARM Peripheral for the details on the GPIO registers.

Be sure to verify that your configuration code is correct. You can test an individual pin by changing the existing loop to blink GPIO 21 or GPIO 22 and so on instead of GPIO 20. Once you have verified that all pins are properly configured, you're now ready to tackle changing the loop body to blink the pins in the scanner sequence.

One strong recommendation from us is that you make a habit of regular git commits. A commit takes a snapshot of your changes and records them into your repository history. This takes a snapshot that allows you to later return to this version if need be. When should you commit? Any time you hit an "interesting" point in your development: after achieving a milestone, before stopping for break, after fixing a bug, before embarking on an exploratory path, and so on. Be sure to include a descriptive message with each commit. Following up a commit with git push will sync your local repository to your GitHub remote repository.

The loop will scan back and forth from the GPIO 20 LED to the GPIO 23 LED. Each iteration of the loop still turns on/off one GPIO, but instead of blinking the same GPIO each time, it will blink the next GPIO pin in sequence.

The scanning pattern should move smoothly back and forth. In particular, exactly one LED should be on at any given time, so the light appears to be "moving" between LEDs. Make sure you handle the left and right ends properly (that is, the leftmost and rightmost LED should be each on for the same amount of time that a middle LED would be on). The scanning frequency should be around 1Hz (that is, the light should bounce back and force about once per second).

Here is a short video of our 8-LED scanner in action:

Writing clean, readable assembly code is a challenge. Commenting is essential!
Be sure to choose good label names and add named constants using .equ to aid readability. Because you don't know how to write functions yet in assembly, you'll need to write your program without the aid of this useful abstraction.

A branch instruction is the assembly equivalent of a goto (a practice long considered harmful https://en.wikipedia.org/wiki/Considered_harmful), and code with lots of branches can be hard to debug and follow. Straight-line code is code without branches and is almost always easier to understand. However, a downside of a straight-line approach is that you may end up with duplicated code. There is a tension here between less code and clearer code. For this first assignment, prioritize writing code that can be easily understood, whether it's by you six months from now or by us in a week when we grade your assignment.

Congratulations on completing your first step on the path to bare-metal mastery! Sit back and enjoy the show by turning off the lights and impressing your friends.

Because you've been committing regularly throughout the development process (even if you haven't been, we're going to pretend that you have because it helps all of us sleep at night) all you need to do now is create your submission tag, push to sync with your remote repo, and open a pull request on GitHub.

Create a submission tag by doing the following:

If you previously tagged your submission but later realize you need to make further changes, commit changes, move the tag to this commit and push. In the commands below note the use of the -f flag to force an update of tag name that already exists:

As before, browse on your repo on GitHub to confirm your submission status.

After committing, tagging, and pushing your submission, the final task is to open a pull request in GitHub just like you did in assignment 0. The pull request should be to merge dev into master and give the pull request an intuitive title like "Submit assign1".

To refresh on the steps to open a pull request, refer to the Assignment 0 writeup.

Assignment 1 is due on 5pm on Tuesday. The timestamp on the tagged commit determines the submission time. Learning to pace your work so as to deliver on schedule is a great skill to build and one that we reward. On-time submissions earn a timeliness bonus. There is also a 48-hour grace period where we accept late submissions without penalty. Read more about the late policy.

If you enjoyed the core assignment portion and want to explore further, we encourage you to tackle the extension. The extension is more challenging, and may involve using additional ARM assembly instructions. It will almost certainly require more complicated code involving conditional branches.

If you watch the Larson scanner carefully, several LEDs are turned on at once. The center one is at full brightness, and the ones on the edge are dimmer. How would you dim an LED? Your challenge for the assignment extension is to implement a scanner with LEDs aesthetically dimmed in a way that would please Glen Larson.

You should have a central, full-brightness light that scans just like in the core version of the assignment, but you should visibly dim the neighbors of that central light as it moves. Aim for a look similar to the Larson Scanner Kit Demo.

You should have at least three distinct levels of brightness.

Before starting on the extension, be sure you have completed all core tasks, including commit, tag, and push of your finished scanner. This ensures your submission tag is a known good place that can be a fallback if the extension doesn't pan out.

The extension follows the same workflow, edit files on the dev branch, make regular commits and pushes. When you have successfully completed the extension, then move your submission tag to this version so it is the one graded.

Our general process for grading assignments focuses on evaluating the functionality and quality of your submission. For functionality, we assess the completeness and correctness of the implementation of required features. We run tests against the code for a variety of situations and report results to you in terms of passed and failed test cases. Quality comprises an evaluation of the design of your implementation, style and readability of your code, and thoroughness of your test cases. We evaluate quality through an individual review and provide qualitative and constructive feedback.

To grade your Larson scanner, your beloved CAs will invoke make to build your larson.bin file and test it on a Pi with the LEDs plugged in. For this process to go smoothly, please ensure the following:

While grading, we'll be checking for the following criteria to be met:

If the CA grading your assignments needs to go into your repository and edit your code for make to successfully build, there will be automatic ding in "Build Quality" and we will be sad.

For long-winded general information on grading and policy, see our pages on assignments and course policies.