Lab 6: Drawing into the Framebuffer

For your next assignment, you will implement library of simple graphics routines and use them to implement a text console for your shell. The goal of this lab is to review concepts and code in preparation.

During this lab you will:

To prepare for lab, do the following:

Plug one end of the HDMI cable into the HDMI port on the Raspberry Pi and the other end to the HDMI input of your display. Power up your Pi and you should see the following test pattern: 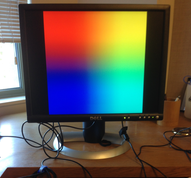 Please be sure to complete this confirmation in advance of lab. If you run into any issues, reach out to us ASAP so we can help resolve. If you are on campus or in Bay Area and need a loaner, email us to make arrangements.

Change to the directory code/grid and build and run the grid program using make run. The monitor should now display a grid of white lines.

Open the grid.c file in your text editor and modify the program in the following three ways:

Remember that C has no bounds-checking on array indexes. Writing to an index outside the bounds of the framebuffer will corrupt that data at that location. The memory neighboring the framebuffer is in use by the GPU and if you corrupt it, the transgression is punished in mysterious ways (screen garbage, a surprise reshowing of the Pi test pattern, lockup of GPU that requires reset of Pi). If you observe a consequence of this ilk, it suggests you need to review how your code accesses the framebuffer memory.

Check-in with us and show off your checkerboard. 1

The framebuffer is a contiguous block of memory that stores pixel data; this memory is shared between the CPU and GPU. When the CPU writes to the framebuffer, the GPU reads the new data and displays the updated pixels on the screen.

The CPU and the GPU communicate about the framebuffer via a mailbox mechanism. The CPU composes a message to memory and sends to the GPU by putting the message address into the mailbox. The mailbox is a set of hardware registers that can be accessed by both processors.

The CPU writes these struct fields when sending the message:

The CPU uses mailbox_write to send the configuration message to the GPU. It then must call mailbox_read to receive the GPU's response. If the return value from mailbox_read is 0, this confirms the request was satisfied and the GPU has filled in values to the remaining struct fields. A non-zero result indicates the GPU cannot support the requested configuration and your graphics are in a confused/indeterminate state. The convenience function mailbox_request is a call to a mailbox_write followed by mailbox_read to read the response.

The CPU reads these fields from a successful GPU response message:

Review the code in the fb_init() function. Discuss with your tablemates and try to answer the questions below.

Overall, the communication pattern we'll be using is:

The message passing between CPU to GPU uses the functions mailbox_write and mailbox_read defined in mailbox.c. Read the code in this file now and discuss with your tablemates and try to answer the questions below. Ask the TA to clarify if there is confusion.

You're ready to answer the check-in questions about framebuffers: 2 3.

To start, here is a quick self-test:

Inspect the code in code/pointers/pointers.c. Compile the program using make, run it on your Pi, and interpret the results. Ask questions about anything that doesn't make sense to you and check-in with us to confirm your understanding. 4

A major part of your assignment will be to draw text on the screen. In order to do this, you need a font. Each character in the font is a little picture that represents the glyph to draw.

This famous font was used by the original Apple IIe. We chose it to provide that extra-special retro touch for your graphical console.

The pixel data for the character glyphs is stored as a bitmap. In a bitmap, each pixel is represented by a single bit. If the bit is 'on', the pixel is to be drawn in the foreground color; if 'off', the pixel is set to the background color. We use a bitmap rather than full RGBA because it takes much less (32 times less) memory. This makes the font data much smaller, and hence faster to upload to your Raspberry Pi.

Below is a pictorial representation of font_default using green to display each 'on' pixel in the bitmap. (click the image to see larger version):

The character glyphs are stored in a single line. The leftmost glyph is for the character '!', whose ASCII value is 33 (0x21), the neighboring glyph is for character '"' (ASCII 34) and so on ending with rightmost character ASCII value 127 (0x7f) Delete, whose glyph is a little checkerboard. The font contains glyphs for 95 total characters, from ASCII 33 to 127.

Each glyph is the same size: 14 pixels wide and 16 pixels tall. This is termed a fixed-width font.

Each line of the bitmap is 1330 pixels long (95 characters * 14 pixels wide), and requires 1330 bits. The bitmap is stored using an array of unsigned char values. For example, the first two bytes in the array are 0x0c, 0x00. Group the 8 bits from the first byte and 6 bits from the second into the 14-bit sequence 0b 00001100 000000. These 14 bits correspond to the top row of the first glyph in the font, which is for the exclamation point character. The vertical line for the exclamation point is 2 pixels wide and positioned slightly off-center to the left.

Look carefully at the function font_get_glyph() in font.c which copies a single glyph from the font bitmap into a buffer. Read this function carefully, since you will use it in the next assignment.

Now change to the directory code/banner and review the code in banner.c. This program calls font_get_glyph to store the glyph image into buf. The code then wants to go on to access buf as a 2-d array through the variable named img, but img is missing its declaration and initialization. Read and follow the instructions marked TODO: to fix this issue. Compile and run and you'll get an ascii banner that prints letters to the terminal using your Pi's font - neat!

You're ready to answer the final check-in 5.

Check in with TA

Before leaving the lab, check in with a TA and discuss any challenges to answering the questions in the lab. If you do not feel confident about your responses, please ask us about it too!